Graphene is a material with extraordinary properties. It is a single atomic plane of graphite, forming a two-dimensional, atomic-scale, honey-comb lattice. The electronic properties of monolayer graphene strongly differ from those of two-dimensional metals and semiconductors, in part because of inherent electron-hole band structure symmetry and a particular density of states which vanishes at the Dirac point. Furthermore, the sublattice degeneracy and honeycomb symmetry lead to eigenstates that hold an additional quantum (Berry’s) phase, associated with the so-called pseudospin quantum degree of freedom. All of these electronic features are manifested through relativistic phenomena such as the Klein tunnelling effect, weak antilocalization or the anomalous quantum Hall effect. The possibility of using the pseudospin as a means to transport and store information has also been theoretically proposed. There, the role of the pseudospin is equivalent to that of the spin in spintronics, such as in the pseudospin analogue of the giant magnetoresistance in bilayer graphene.

In our group, we study the spin dynamics of carriers in graphene and their interaction with other degrees of freedom such as pseudospin. We are interested in understanding the spin relaxation mechanisms, including spin lifetime anisotropy, the spin Hall effect and proximity effects with other 2D materials (e.g. MoS2 or topological insulators) or with ferromagnetic insulators.

Determination of the Spin-Lifetime Anisotropy in Graphene

We have proposed, developed and implemented a novel method to determine the spin-lifetime anisotropy of spin-polarized carriers in graphene. In contrast to prior approaches, our method does not require large out-of-plane magnetic fields and thus it is reliable for both low- and high-carrier densities. We first determine the in-plane spin lifetime by conventional spin precession measurements with magnetic fields perpendicular to the graphene plane. Then, to evaluate the out-of-plane spin lifetime, we implement spin precession measurements under oblique magnetic fields that generate an out-of-plane spin population. We find that the spin-lifetime anisotropy of graphene on silicon oxide is independent of carrier density and temperature down to 150 K, and much weaker than previously reported. Indeed, within the experimental uncertainty, the spin relaxation is isotropic. Altogether with the gate dependence of the spin lifetime, this indicates that the spin relaxation is driven by magnetic impurities or random spin-orbit or gauge fields. The results of pour work appeared in Nature Communications.

Spin relaxation times (τs) for varying impurity (Au) density  between 0.05% and 8% extracted from the microscopic model. Inset: τs values using the continuum model for ρ = 1% and 8% (filled symbols). b, Scaling behaviour of TΩ and τs versus 1/ρ. The TΩ values obtained with the microscopic (resp. continuum) model are given by red diamonds (resp. red solid lines).

In a recent report in Nature Physics, in collaboration with the group of S. Roche, we unravel a spin relaxation mechanism for non-magnetic samples that follows from an entanglement between spin and pseudospin driven by random SOC, unique to graphene. The mixing between spin and pseudospin-related Berry’s phases results in fast spin dephasing even when approaching the ballistic limit, with increasing relaxation times away from the Dirac point, as observed experimentally. The SOC can be caused by adatoms, ripples or even the substrate, suggesting novel spin manipulation strategies based on the pseudospin degree of freedom.

As reported in APL, we have demonstrated a large enhancement of the spin accumulation in monolayer graphene following electron-beam induced deposition of an amorphous carbon layer at the ferromagnet-graphene interface. The enhancement is 10000-fold when graphene is deposited onto poly(methyl metacrylate) (PMMA) and exposed with sufficient electron-beam dose to cross-link the PMMA, and 1000-fold when graphene is deposited directly onto SiO2 and exposed with identical dose. We attribute the difference to a more efficient carbon deposition in the former case due to an increase in the presence of compounds containing carbon, which are released by the PMMA. The amorphous carbon interface can sustain very large current densities without degrading, which leads to very large spin accumulations exceeding 500 ueV at room temperature. Because of the simplicity and transferability of the deposition method, the low reactivity of carbon and its low current degradation, amorphous carbon can be used as an alternative material to conventional insulators used in spintronics, such as MgO or AlOx.

The interaction between graphene and the substrate has been identified as one of the reasons for the low mobilities of spintronic graphene devices. The substrate contributes charged impurities that increase the scattering of carriers and creates puddles of holes and electrons that reduce the mobility. It could also result in small locally-strained regions where spin-orbit interaction is enhanced. In order to gather knowledge on spin relaxation processes and possibly enhance spin lifetimes, it is important to fabricate suspended graphene spintronic devices. 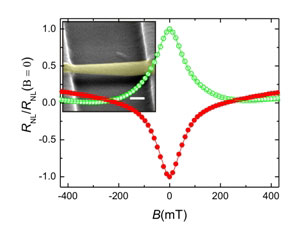 Electrical detection of spin precession in freely-suspended graphene spin valves (see image). The devices are fabricated with a single electron-beam-resist process that minimizes the fabrication steps and the number of (aggressive) chemicals used. The main panel shows an example of spin precession (Hanle) measurements.

As reported in Small, we have achieved spin injection and detection in freely-suspended graphene using cobalt electrodes and a nonlocal spin-valve geometry. The devices were fabricated with a single electron-beam-resist (PMMA) process that minimizes both the fabrication steps and the number of (aggressive) chemicals used, greatly reducing contamination and increasing the yield of high-quality, mechanically stable devices. As-grown devices can present mobilities exceeding 104 cm2 V-1 s-1 at room temperature and, because the contacts deposited on graphene are only exposed to acetone and isopropanol, the method is compatible with almost any contacting material. We study spin accumulation and spin precession in our nonlocal spin valves. Fitting of Hanle spin precession data in bilayer and multilayer graphene yields a spin relaxation time of ~ 125-250 ps and a spin diffusion length of 1.7-1.9 µm at room temperature.