As electrons move past atoms in a solid, their charge distorts the nearby lattice and can create a wave. Reciprocally, a wave in the lattice affects the electrons motion, in analogy to a wave in the sea that pushes a surfer riding it. This interaction results in a thermoelectric effect that was first observed during the 1950´s and has come to be known as phonon-drag, because it can be quantified from the flow of lattice-wave quanta (phonons) that occurs over the temperature gradient. Soon after the discovery of the phonon drag, an analogous phenomenon was predicted to appear in magnetic materials: the so called magnon drag. In ferromagnets, the intrinsic magnetic moment or spin of the electrons arrange in an organized fashion the spins, maintaining a parallel orientation. If a distortion in the preferred spin orientation occurs, a spin wave is created that could affect electron motion: a flow of magnons (spin-wave quanta) could also drag the electrons. Despite the similarities with phonon drag, the observation of the magnon drag has been elusive, and only a few indirect indications of its existence have been reported over the years. The main reason being the presence of other thermoelectric effects, most notably the phonon drag, that make it difficult to discriminate its contribution to the thermopower. 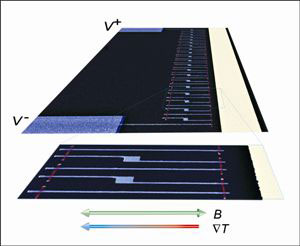 We used a unique device geometry to discriminate the magnon drag from other thermoelectric effects. As reported in the journal Nature Materials, the device resembles a thermopile formed by a large number of pairs of ferromagnetic wires placed between a hot and a cold source and connected thermally in parallel and electrically in series. By controlling the relative orientation of the magnetization in pairs of wires, the magnon drag can be studied independently of the electron and phonon drag thermoelectric effects. The work is very timely as thermoelectric effects in spin-electronics (spintronics) are gathering increasing attention as a means of managing heat in nanoscale structures and of controlling spin information by using heat flow. Measurements as a function of temperature reveal the effect on magnon drag following a variation of magnon and phonon populations. This information is crucial to understand the physics of thermal spin transport. It both provides invaluable opportunities to gather knowledge about electron-magnon interactions and may be beneficial for energy conversion applications and for the search of novel pathways towards transporting spin information.