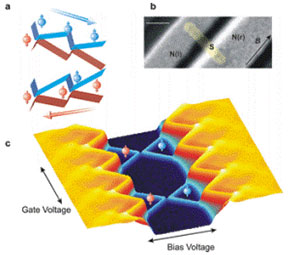 a. Schematic potential in a rocking spin ratchet. b. Scanning electron microscope image of a single electron transistor (SET) designed as a spin ratchet. c. Typical differential conductance versus gate and bias voltage of the SET (logarithmic scale, black: 0 uS, white: 15 uS)

Ratchets and Brownian motors are known to operate out of equilibrium and combine asymmetry and unbiased ac driving or noise to generate useful work, for instance the transport of particles. They have characteristics in common with rectifiers, which are central in modern electronics but cannot function in the presence of noise. Because electronics requires ever shrinking devices, where noise and single particle motion become increasingly relevant, ratchets appear as an alternative to standard rectification and as a means to power nanodevices via noise rectification. Despite the interest in the field, most experimental realizations of ratchets are relatively recent. Nevertheless, they have cemented the belief that ratchets can reach the expected potential to control particle transport. In particular, electronic-charge ratchets were realized in semiconductor heterostructures and, given their success, analogous processes have been proposed that aim to transport the spin, which is a far more challenging task. Controlling and manipulating the spin is central in the recently emerged field of spintronics, which tries to develop new functionality in devices by focusing on the electron spin rather than on its charge. The demonstration of a spin ratchet represents an important conceptual step in this direction. Moreover, if working at the single electron level, spin ratchets could be utilized to address fundamental questions of quantum mechanics in the solid state or help prepare the path for ultrapowerful quantum computers.

We demonstrated a experimental realization of a spin ratchet [Science 330, 1645 (2010)]. Our spin ratchet relies on a single electron transistor with a superconducting island and normal metal leads and is able to discriminate the electron spin, one electron at a time. Careful analysis of the involved electron transport events and proper design of the device result in spin polarized currents with opposite sign when the bias is reversed, the hallmark of a spin ratchet.